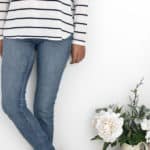 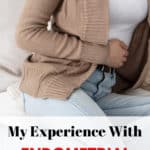 Before I get into my story about endometrial ablation (or uterine ablation), I’m giving you fair warning. This will be blunt and honest, with quite a bit of TMI sprinkled in. No gross photos, but I’m not holding anything back. If you want to know my TRUE experience with endometrial ablation, read on. (UPDATE: Scroll to the bottom for my 6 month update!)

My Periods are Out of Control

I have had five pregnancies, resulting in four babies and one miscarriage. My periods had never been too bad before, and my PMS isn’t all that terrible either. To be honest, my ovulation pain (or mittelschmerz) was often more painful than my actual periods. But for some reason, after having Rowen, my uterus lost its mind. My periods got so heavy that I would have to wear a super plus tampon AND a long/heavy pad to bed. When I would get up in the middle of the night to feed Rowen, I could feel my period gushing out. I would have to change my super plus tampon every 2-3 hours during the day, otherwise my clothes got ruined.

I spoke with my doctor about it at my yearly pap appointment. She suggested options that would help: birth control pills (I suck at remembering to take them plus I hate hormones), an IUD (nope, not happening), arm implant (makes me want to vomit just thinking about it, so nope).

“What about an ablation?” she asked. I’d heard of it before but didn’t really know much about it, so she explained it to me.

An endometrial ablation (also called uterine ablation) is where the cervix is slightly opened up and a device is inserted into the uterus. A netting-type material expands to fit the shape of the uterus and the uterine lining is basically cauterized to prevent endometrial buildup in the future. You can read more about it on the NovaSure website, which is the type of uterine ablation procedure that my doctor used on me.

There are risks, of course. But the benefits? Little to no period in the future. Plus my doctor told me she would give me a cocktail of pain and anxiety meds before the procedure. I said SIGN ME UP. 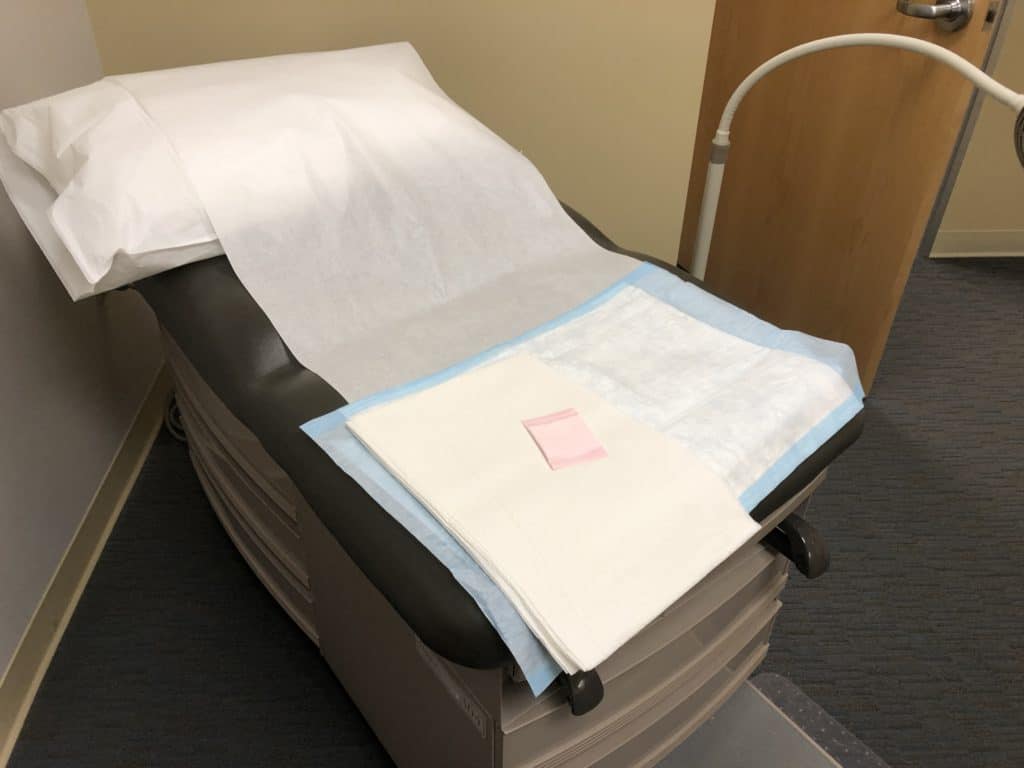 Because a uterine ablation is an aggressive procedure that basically vaporizes the endometrial lining of the uterus, doctors must first check to make sure there is no cancerous cells present. They also have to ensure you aren’t pregnant and have decided to not become pregnant again in the future. Because my husband has already had a vasectomy, we were good to go on that part. 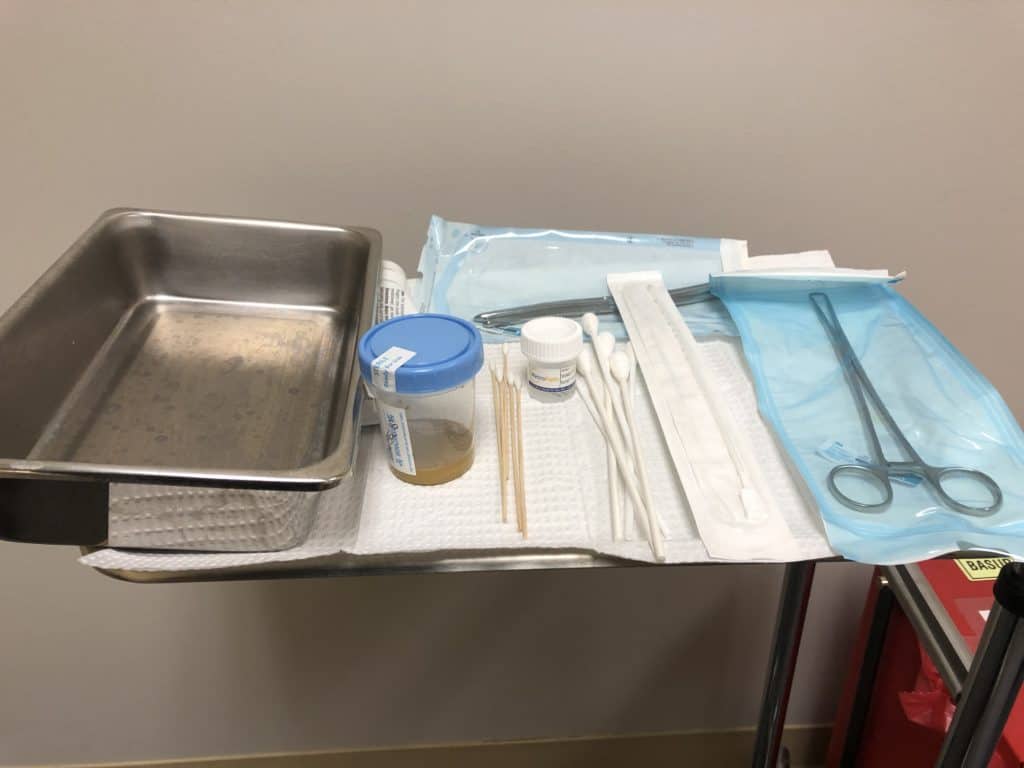 First they did an ultrasound to check my uterus and ovaries for any signs of cancer or abnormalities. No issues there – quick in and out with the wand.

So I went in for my endometrial biopsy.

Not gonna lie. That hurt. I’ve had colposcopies before, which don’t feel good. Pap smears don’t feel good. This? This freaking hurt. The nurse practitioner had to insert a tool that slightly held open my cervix so she could insert another tool to take a sample of cells from inside my uterus.

If you’ve ever had a baby, you know what cervical checks feel like. Or membrane stripping. This was similar, and maybe a little worse.

When I yelled (yes, I did, sorry about that), she asked if I wanted her to take a break. I asked her to just hurry and finish while I tried to breathe through it. It worked, and it was over.

Afterwards, I told her they should consider putting this picture of Idris Elba on the ceiling so it would make the procedure more pleasant. To my knowledge, they did not do what I asked.

At my endometrial ablation pre-op appointment, I had blood work drawn to make sure nothing else was causing problems with my periods such as my thyroid. I also met with my doctor to go over the details of the uterine ablation: what to do and what not to do, what to expect, and to get my prescriptions for the procedure. Everything was pretty simple, and I was pretty confident I was doing the right thing. My doctor asked if I wanted to do the procedure in-office with just oral medication, or if I wanted to go into the OR with general anesthesia. I opted to not be put to sleep, and go the less invasive route.

Then I stressed over it for the next week, scared that I made a terrible choice. Would it hurt? Would I feel anything? Ugh, would it be anything as bad as that biopsy? Would they put the dang magazine cover of Idris Elba on the ceiling NOW? This is definitely a terrible idea.

Just kidding. We got a bomb cyclone in Colorado and my procedure had to be rescheduled. Silly Colorado and their blizzards.

I got up and ate a piece of brioche for breakfast. The “official” instructions said to not eat beforehand, but my doctor said she didn’t want me nauseated on an empty stomach and to eat a light breakfast. I did skip coffee though, because the thought of barfing coffee definitely took away my appetite for it.

Before I left home, I took 800 mg of ibuprofen and took the rest of my meds with me. I was supposed to take them an hour before the procedure, in the office. Once checked in, I had to leave a urine sample to make sure I wasn’t pregnant. Then the nurse came out to get things started. Yay, ablation time!

I went to the bathroom with my two suppositories. Ok, I can do this I thought. After some struggle, I opened the first one. It broke in half. Great. I sat on the toilet and inserted it *back there* like I was told. It was much easier than I thought. Kinda felt like I was going to poop it back out, but it stayed in. I stood up to get the second one off the table next to the door. As soon as I did, one of my nightmares happened. Some lady opened the bathroom door. I HAD FORGOTTEN TO LOCK IT. So I’m standing there, pants around my ankles, goods showing, shouting “SORRY!” and slamming the door back shut. Nothing left to do but insert the second suppository, wash my hands, and hurry out hoping to never make eye contact with that lady.

Luckily the nurse came to get me pretty quickly, and I got to hide in an exam room. She took my vitals, checked all of my meds, and had me take my next two prescriptions: Valium and Percocet. Both said to take 1 or 2 before the procedure. I wasn’t taking any chances, so I took 2 of both.

Next, she had to give me a shot of Toradol in my hip. At this point, I just knew my whole day was going to suck. Medicine in my butt, medicine in my hip, strangers seeing me naked, no attractive magazine cover on the ceiling. Horrible. And an endometrial ablation to top it off. Too bad I couldn’t have done this all via a Virtual Visit!

I was just ready for it to be over. 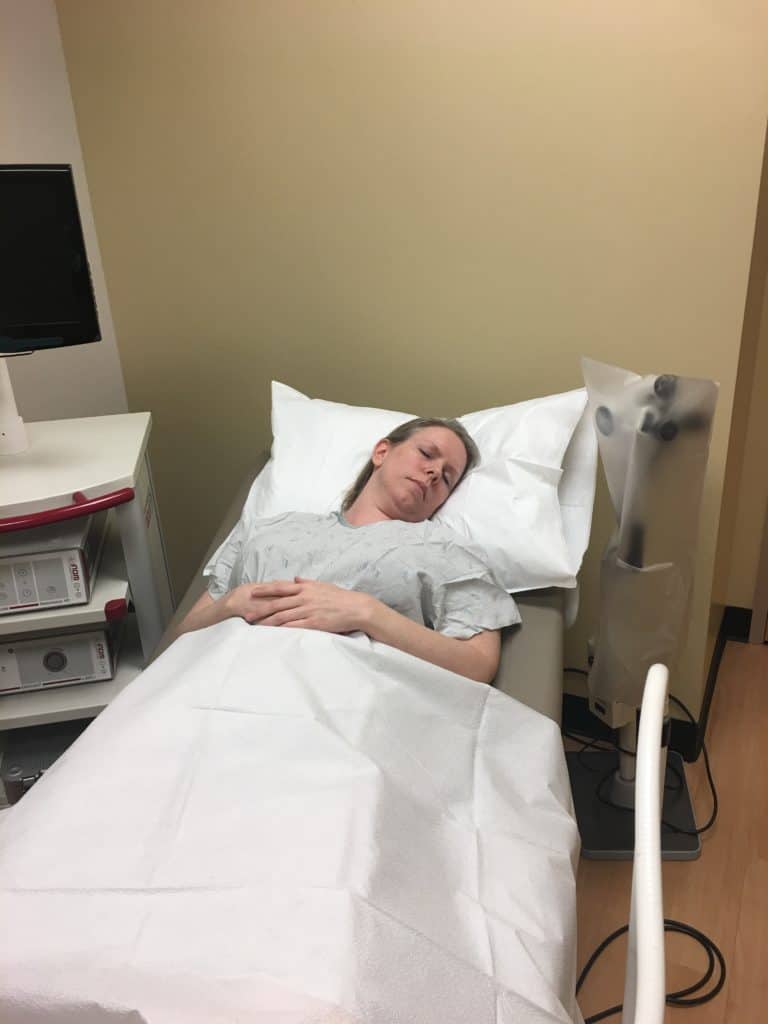 I sat, waiting for the meds to kick in. About 5-10 minutes pass and I still feel fine. Then suddenly I turn my head as the doctor walks in, and the room tilts. Ohhhh yes, here we go. She left again, I’m pretty sure, and somehow my husband and maybe the nurse helped me up onto the bed. That’s when things get fuzzy.

It kinda felt like having too many margaritas and then standing up quickly. Whoops!

According to my husband, he and the nurse later helped me walk to the room where the procedure took place. I remember waking up and feeling some pain a few times. I remember saying “ow” or commenting that something hurts, and the doctor/nurses told me I was doing a great job. Then I was back out. I guess you could say I was “awake” but not conscious enough to really know what was going on.

My husband also told me I snored a lot today. That’s one thing I could’ve lived without hearing.

I remember waking up back in the exam room, with my husband feeding me goldfish crackers and a juice. I was starving. Soon after that, I was sent home. I slept on and off, in and out of fuzzy consciousness. The day started at 9:30 AM, procedure at 10:30 AM, home by noon, and I didn’t wake up fully until 4:00 PM. 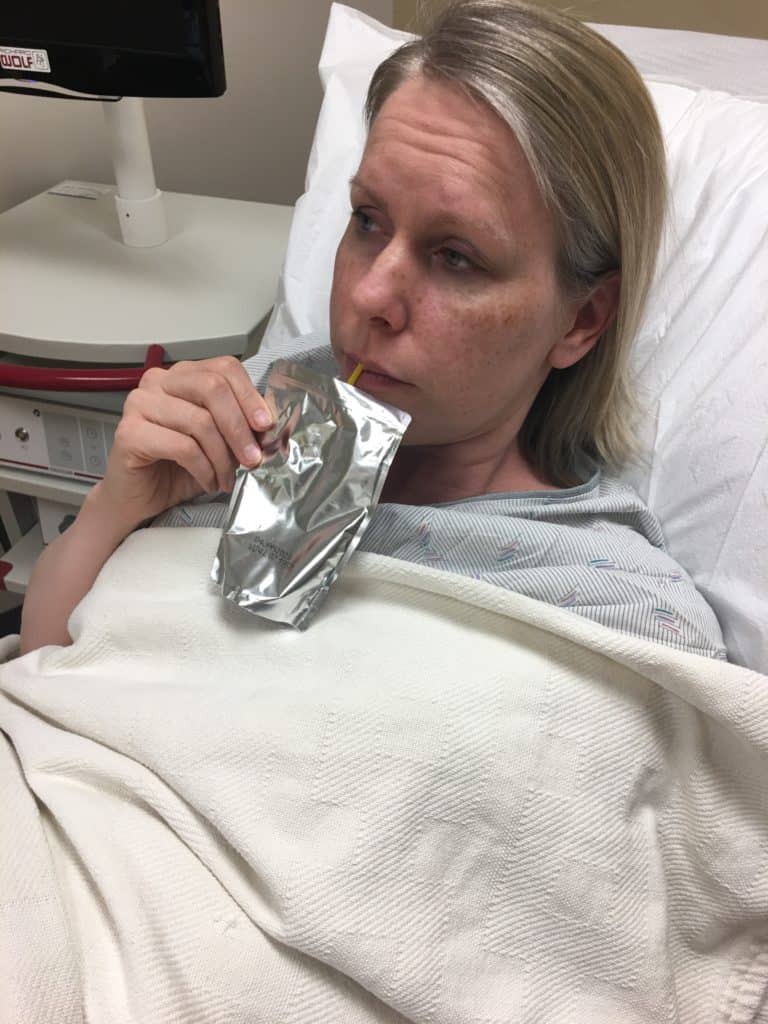 So far, I’ve only had some mild cramping. I haven’t even had to take anything for it. I’ve been ravenously hungry, mostly trying to eat to keep myself awake. I did have a bit of nausea in the evening, but no vomiting at all. With all the worry I had about pain and discomfort, I have to say this went WAY better than I expected.

I will update in a month or so on how my periods are going – if they are going at all. I’m currently on about day 25 of my cycle, so my period is due within the next few days. Hopefully this works to help lighten my cycle or make it go away completely!

Have you had an endometrial or uterine ablation? What was your experience like?

Well I’m happy to report that six months after my endometrial ablation, I am doing well! I had no complications and everything has healed normally. There was definitely a lot of strange-colored discharge for about a month, but I was told that was normal. I vaguely remember it smelling weird too – also normal.

Unfortunately, I am not one of the lucky ones to have no periods. I still get my cycle each month like clockwork. Only now, instead of using a super+ tampon and a pad and feeling the gush when I stand up, I can get by with a pantyliner or a regular tampon. (I know, I know, cups are supposed to be better – I just haven’t made the switch.) And it only lasts 3 days on average, sometimes 4. Not too bad!

Also, I don’t even remember much of the procedure now. I actually wrote this entire post while I was still fairly drugged up on pain meds – which is great because that’s probably the most memory I had of that day. But also, my apologies if this blog post seems a little more scattered than my typical writing! 😉

Georgia mom, educator, personal trainer, photographer. Trying to live healthy and green, making the world a better place. Mostly crunchy. Running on caffeine is my favorite form of cardio. Eating a healthy balance of salads and chocolate. Usually can't remember my kids' names. Hot mess 24/7. Read my "About Me" page for more info!

Don't miss out! Get the weekly newsletter!